In the last blog we saw the Protection of Rights as the first factor considered in Compliance.

In this write-up we will see the economic reasons for the necessity of Compliance.

I have also tried to correlate some theories from micro and macro-economics to explain these rationales.

Market failure refers to a situation in which market left on its own fails to produce an efficient allocation of resources and as a result perform sub-optimally.

If a factory pollutes the environment, this ‘externality’ may impact health and well-being of thousands of population.

Rationale 4: Gaining economic efficiency by regulating ‘market power’ of a single economic actor (or a small group of actors) 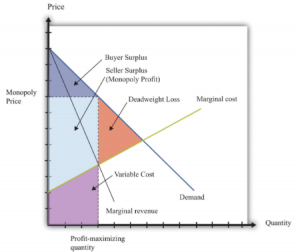 Let me explain this with buyer/consumer surplus, seller/producer surplus and deadweight loss with reference to the diagram below.

Ideally, in an efficient market (i.e. perfectly competitive market), price and optimum quantity of output are determined by the intersection of demand curve and marginal cost curve. However, in monopolistic or oligopolistic market, a single economic actor (or a small group of actors) with their market power produces sub-optimal quantity of output and sells product at a price that exceeds its marginal cost of production. At this price, consumers pay more and producers maximize profit.

However, this distorts market. The total welfare of the society which is the sum of buyer/consumer surplus and seller/producer surplus remains sub-optimal. The overall loss to the society is explained by the area of deadweight loss, which is not realised because of market power the monopolist enjoys.

Government brings in regulation to discourage this monopolistic behaviour through antitrust policy. And when monopoly is desirable due to economies of scale for an industry, government tries to minimize deadweight loss by regulating price.

Public good refers to commodity or service which is made available to all members of society without any discrimination. Two main characteristics of public good are that it must be non-rival in consumption and non-excludable.

Source: Lecture note on Public Goods from Scholars at Harvard

There are many other examples of public good such as street light, and, in some countries, healthcare and education are also treated as public goods.

Ideally, as per free market theory, public good such as national defense is needed by all citizens, and vertical summation of individual citizen’s demand or marginal benefit curve should represent overall social willingness to pay for public good (overall demand curve). And socially optimal quantity of public good would be determined by the intersection of overall demand curve and marginal cost of producing this public good.

However, in case of public good, individual will try to do ‘free riding’ by suppressing his or her true personal demand function, and let others pay for them. As a result, socially optimal quantity will remain too high with respect to individual (suppressed) demands.

This is the reason why provision of public good would not be possible in normal marketplace.

Government comes to citizen’s rescue by imposing taxes irrespective of the fact whether a person demands for public goods or not. Government uses revenue from taxes to deliver public goods. 10

Asymmetric information can distort the market in a big way, where some of market participants have better information than others.

For example, insiders of a company may have prior knowledge of key developments such as new discovery, merger & acquisition or product launch before it is announced in public. With this advance information they may attempt to gain significant profit unethically by deciding timing for buying or selling stocks, or inform their friends and family members accordingly.

This makes stock market regulators to set guidelines regarding insider trading and enforce compliance on those. Regulators in many countries hold promoters and top executives responsible for any violation of insider trading norms.

Based on research inputs by Manas Bairagi

Compliance Never Has a Day off!

Regulations across Countries for Protection of Data

The heavy burden on Compliance Officers