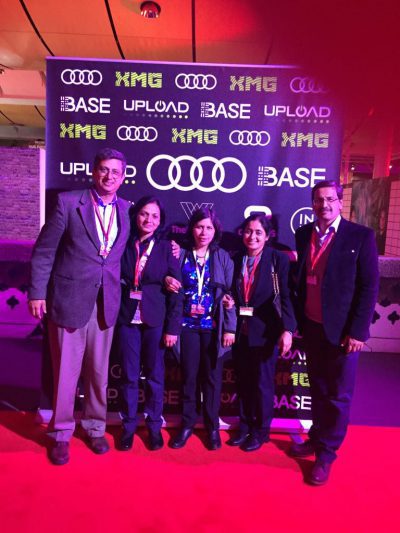 The team at Sigmify was very fortunate to visit Hannover in Germany to attend CeBIT17. This was our third year at the show and each time we have come away making some great friends and learning a lot. We thought it would be nice to share some of the really interesting stuff we saw and what our world will be like in the next 10-20 years. 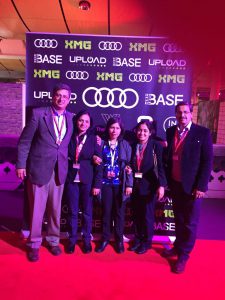 Here are some of the far reaching changes affecting our lives.

We attended a very convincing keynote address by Johann Jungwirth, the Chief Digital Officer of Volkswagen, filled with images of clean empty streets ( no cars blocking the two sides of the road) , and orderly rows of cars driving on each side of the road. This technology is certainly here to stay . The shift will be gradual , manufacturers will keep on adding more technology and sensors to cars , so just as we have gotten used to how our smart phones seem to “know” , things about us, we will expect our car to warn us or even take action when we are drifting off, feeling sleepy , brake in case of an accident ahead or tell us someone is in our blind spot when changing lanes. Soon the cars will take action themselves. The slow stage wise move to the ultimate driverless car. 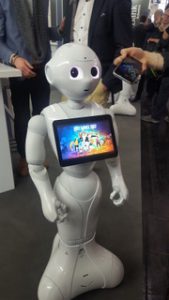 Robots  are definitely here to stay. Last year I was blown away by Pepper, a talking Robot from Aldeberan , a company , funded by SoftBank. Check out this link from utube – https://www.youtube.com/watch?v=ApEB34l4phQ
It was genuinely like talking to a small person, you pretty much reacted the same way , as Pepper seemed to “get” you in an emotional sense. These robots are now used in Japan as part of the family , to do simple stuff like reminding you to do something like take your medicines and also in shops to provide information . We saw Robot arms and Robot legs that danced to music . Soon there will be Robot bar tenders! Walking through airport security , I couldn’t help wondering how soon everything will be automated – we already do self check in, one more step with a Robot to take our bags , weigh and slap on the destination tags to our baggage and we may not meet with a single human until we reach security.

The age of the cyborg

Digiwell is a company that will “Tag ” you with an RFID microchip or an implant between your thumb and index finger.There was a huge queue, for getting it done at CeBIT. You can simply wave your arm to open doors, start your car, open your phone, or anything else that is set up to read the signal from your implant.
Cyborgs are humans with some artificial components in them. We already have people with prosthetic arms and legs and 3D printed organs and tissues doing fine. In the future we will have complete organs which are created using 3D printing techniques, implanted as needed.
But what about the brain ? Digiwell, says it has helped researchers with implants in their brains talk to each other via the implants! Talk about mind reading! They believe future implants will allow us to learn new languages, new skills , basically a way to augment our intelligence.

Great key notes from Edward Snowden and Ray Kurzweil among others.
It was a treat to be at such close quarters to the above legends! Edward Snowden was the only person speaking to us virtually , but it was still amazing. I was blown away by his utter commitment to the truth and what is right. This was a reluctant hero, someone who has no regret about what he did and where it would lead him – he felt he could not go on living a lie , without speaking out. For those who may not remember, Edward Snowden was the whistle blower who provided evidence that the US government was recording all communications within the country, while denying it was doing so in public and to congress.

Ray Kurzweil, the brilliant inventor spoke about the future very positively. He believes, that the fifth paradigm is now in action, where we are computing in 3 dimensions, way past Moore’s law. Cost/instruction is coming down exponentially. The growth rate in technology has been averaging 18% every year, because of  innovation led by cheaper hardware, supporting applications like Facebook and google, which would not have been possible in an earlier era.

The genome project is also progressing exponentially, so we can soon manipulate the building blocks of our bodies to revolutionize medicine. We can fix broken hearts via stem cells, grow organs with a person’s own DNA, so replacing our organs would be a no brainer within the next 10 years. Healthcare is soon becoming technology driven, new technologies like immunotherapy that work against cancer.

The same will soon be true for other areas like buildings (modular buildings) , food (hydroponic and vertical farming) and clothes too. Will we actually be able to consume more food and clothes? Probably not, unlike our data needs there is only so much food and clothes , a person will need. Read more about Ray at http://www.kurzweiltech.com/aboutray.html

Is the time right to start this journey? Get-there-itis? Should we stay… or should we go?